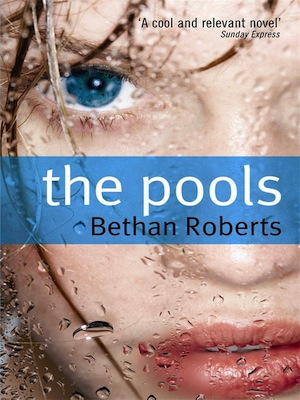 The Pools looks at the death of Robert, a 15 year old boy, and the repercussions that the event has on people involved with the boy’s life.

The novel is set in a small town in Middle England, in the Mid 1980’s, where nothing seems to happen. The teenagers seem to suffer from terminal boredom, and when not at school talk about nothing in particular.

The characters of the parents are well drawn, and the fact that the courtship of Robert’s parents, Kathryn and Howard shows something of their lives together. Howard’s father died when he was young, and he spends much of his adult life looking out for and after his Mother, whilst Kathryn is a young widow.

Howard works at the local Power Station, whilst Kathryn is a Librarian, and their quiet domestic life of work, home, and the garden, which is Howard’s pride and joy, is bought into sharp relief by the arrival of their Son.

The book follows the life of the three, but it also includes Joanna, who becomes another narrator for the story. She is a friend of Roberts, who works Saturday’s in the local shop. Her domestic situation is in total contrast to Robert’s. Her Parents have split up, she rarely sees her Father, and she does not much care for her Mother’s new partner, Simon, he tries to tutor her in the ways of Literature and Poetry.

Joanna narrates Simon’s life when he is at school, and she develops a crush on her, even though his close friendships with other boys, and talent for art indicate to her that he may well not be interested.

The emerging sexuality of Robert is a topic that Howard, in his somewhat repressed way is uncomfortable in dealing with, which puts a distance between Father and Son. The closeness of their early relationship, Howard’s recollection of the first bike he bought for his son, and his remembrance of the Minnie Mouse bell, or the day that they spent at the Tank Museum, bonding over the weapons of war, is shown in direct contrast to the distant relationship, and distinct lack of understanding between the two at the end of the book.

The tragic and early death of Robert, by either drowning, or being stabbed by Shane, another boy who’s development was effected by a Car Accident is sign-posted from the prologue of the book, which shows Kathryn unable and unwilling to move, whilst Robert prepares her for their Son’s funeral.

At nearly three hundred pages, the book is not a short read, but the fact that the novel is chopped into small chapters, with each chapter narrated by either Joanna, or Howard, it helps to push the narrative thrust of the book along.

There are no unnecessary chapters or moments within the book as a whole, although the awkwardness of teenage life, and parents struggling with the changes that those teenage years brings is very well drawn through the whole of the book.

Howard cannot understand the leanings that his son is developing, but as their only child Kathryn feels it is important to encourage the artistic talents of their son, which leads to him changing schools, and meeting Joanna. The dichotomy of Howard’s way of wanting to bring up Robert, and his wives more bohemian way shows the times that the two were bought up. They were both children of the 1960’s, but with different outlooks and character imprints from that time.

As well as the novel, there is also a revealing story about how the book came to be written, and this helps to explain some of the choices in the authorial voices within the story, and it also says how even though she has had her novel published, she still has to struggle as much as anyone else to get the next one finished, which is reassuring news for anyone sitting at a computer, hammering out words, hoping that one day they may make sense to someone else.