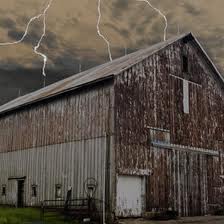 Just a Swingin’
by Kenneth Sibbett

Ron sat down and stared at his little brother, swinging in the strong breeze, the aftermath of Irene. A large swirl was making the wooden brace that held the rope make a ‘creeping noise every few seconds. Ron kept drinking out of his pint of Popov vodka, probably the reason Eric was dead anyway, and looked at Eric, slowly swinging from the oil-smeared junkyard rope that had been on that wooden brace for years and had taken out so many motors that he couldn’t really remember them all.

That it was one hell of a piece rope went through his mind, even though he didn’t want it to. He remembered when his Dad bought that big piece of rope, brand new from McAuthor’s Hardware to take-out a motor in a 66’ Dodge Coronet. He could not make his mine work.

Ellen would be back soon. What was he going to tell Ellen?.. And the boys…perhaps he should cut him down.., but., he probably needed to call Daddy.., and the Sheriff’s Dept., first. They might think he helped him but.., he,..just walked off to take a piss and didn’t come back to the fire, a 55-Gallon Drum they had filled with wood and shit to burn so they could drink and smoke some reefer.

Why in the hell did he hang himself, hell, I don’t even have my phone, Ellen’s got it., dammit,..,

He went and sat down next to the drum, but had to back away. It was so hot now the metal was an orangist-reddist-blueist color that you could probably put your hand through and even though it would burn your hand off, it would not move or break but just stay there, hot as Hades. He backed up and took another sip of Popov.

He thought about firing up a joint, but didn’t think it would be very Christian of him, with Eric dead and all. Then he though, what the hell, he ain’t gonna know, not in this world anyway and fired up a piece of joint he had outed earlier. Him and Eric had grown this shit, now he would have to finish it up and sell it. Maybe give Ellen and the kids the money, or most of it, he had a truck payment that had to be made, or else.

He saw the headlights coming down the dirt road, damn, what was he going to tell Ellen? He hoped she dropped the twins off somewhere, damn they didn’t need to see their daddy swinging like that. He got up and ran over to the truck before Ellen could get out. She kicked the door open, a six pack in her hand, but Ronnie caught the door and held it.

“What the fuck’s wrong with you moron, you on crack? Ellen said, laughing.,Ronnie. .., just stared at her, then at the boys, thanking God they were asleep.., then back at Ellen.

“What” she said, giving him the stink-eye. “Whats Eric done now, jumped off the roof of the barn or something”? Ron, could only stare at her, until she kicked the door and ran into the barn..,

He heard the scream, but so did the boys and he had to get to them before they got out of their side of the truck to see what their Mama was screaming for. He ran around, told the boys to sit back down and lock the door.

Of course, being twins and mean as hell, they went out the other door and ran into the barn and saw their dad, swinging from side to side in what breeze was left over from Irene. He couldn’t help but think that the weatherman had said the water would be the worst part of the hurricane. Those bastards were always wrong.

2 thoughts on “Just a Swingin’”