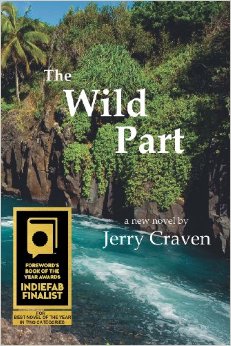 In the award winning author’s preface, Jerry Craven relates his novel came from memory “filtered through imagination.” The author manages the difficult task of capturing a boy’s point of view; some of Don’s views are from movies that his fellow companion, a native girl, isn’t familiar. The Wild Part is multi-layered fiction for youth and adults about Don and Rosita that begins when they leave their village of El Tigrito to catch a ride to a village to see a shrunken head supposedly hung in a shop; they end up in the interior of Venezuela.
Rosita is a strong native girl who knows how to live off the land and tells Don: “Where there are frogs, there will be snakes. We should climb a tree to keep above the snakes.” Don worries about his family who are probably looking for him but after all their adventures, wonders if instead of returning home, they should return to the jungle where Rosita wouldn’t be laughed at.
The point of view is the coming of age boy reminiscent of Huckleberry Finn and his travels with the slave, Jim. Rosita wisely concludes near the end of the novel, ”People are the strangest animals in the jungle” and refers to Evita Peron many times as someone held in high regard by her people. The novel that shows instead of tells, can be read as an adventure story by young adults and as a novel exploring wider questions such as the role of women, faith, good and evil, society, equally resonant to adults: it whispers and avoids shouting. Like Nathaniel Hawthorne’s allegory, Young Goodman Brown which also starts at dusk in the wilderness, it’s a journey into self-scrutiny.
Living off the land suggestions by Rosita are especially appealing such as: catching water with a large leaf: one of them drinking while the other watching for anaconda;
Don can speak Spanish and they run across a wide variety of characters from miners to witches. Humor is evident as in the chapter when the main characters discuss the best way to deal with bats, vampires, and coffins: how each of them manages the unfolding of events shows their character and what they think their expected roles of a blond boy and dark haired girl.
I would have liked to have had more about the lives of the two main characters before they began their trip—what their families, home, and village were like, and something about how their trip related to their future: more development of the other people in the novel also would give contrast to events.
At the end of the paperback are very helpful discussion questions for teachers and book club leaders such as ways the novel evokes the Garden of Eden. There are important questions about faith, God, and a variety of native snakes that appear in different scenes; the novel brought to mind Joseph Conrad’s Heart of Darkness and its questions about civilized society, racism, and its use of snake symbolism in pilgrim passages.
The novel won Foreword’s Book of the Year Wards Indiefab Finalist for Best Novel of the Year in two categories. Another book by the author is Saving a Songbird and Other True Stories from Texas to Venezuela: http://www.amazon.com/Saving-Songbird-Other-Stories-Venezuela/dp/0982734255/ref=sr_1_6?s=books&ie=UTF8&qid=1402773706&sr=1-6&keywords=jerry+craven

Carol Smallwood has appeared in: The Writer’s Chronicle and English Journal. Some anthologies she edited include: Library Services for Multicultural Patrons: Strategies to Encourage Library Use (Scarecrow Press 2013); Bringing the Arts into the Library: An Outreach Handbook (American Library Association, 2014).