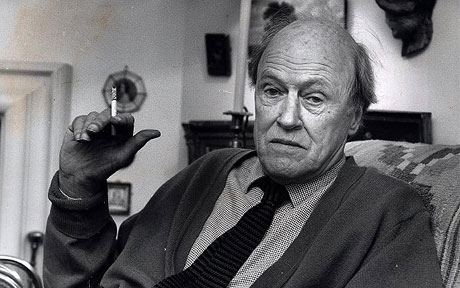 A previously unpublished chapter of Charlie and the Chocolate Factory

A previously unpublished chapter of Roald Dahl’s Charlie and the Chocolate Factory, originally deemed “too wild” for children and found among Dahl’s papers after his death, has been published in the Guardian.

The remaining eight children, together with their mothers and fathers, were ushered out into the long white corridor once again.

“I wonder how Augustus Pottle and Miranda Grope are feeling now?” Charlie Bucket asked his mother.

“Not too cocky, I shouldn’t think” Mrs Bucket answered. “Here – hold on to my hand, will you, darling. That’s right. Hold on tight and try not to let go. And don’t you go doing anything silly in here, either, you understand, or you might get sucked up into one of those dreadful pipes yourself, or something even worse maybe. Who knows?”

Little Charlie took a tighter hold of Mrs Bucket’s hand as they walked down the long corridor. Soon they came to a door on which it said:

“Hey, this is where Augustus Pottle went to, isn’t it?” Charlie Bucket said.

“No”, Mr Wonka told him. “Augustus Pottle is in Chocolate Fudge. This is Vanilla. Come inside, everybody, and take a peek.”

They went into another cavernous room, and here again a really splendid sight met their eyes.

In the centre of the room there was an actual mountain, a colossal jagged mountain as high as a five-storey building, and the whole thing was made of pale-brown, creamy, vanilla fudge. All the way up the sides of the mountain, hundreds of men were working away with picks and drills, hacking great hunks of fudge out of the mountainside; and some of them, those that were high up in dangerous places, were roped together for safety.

As the huge hunks of fudge were pried loose, they went tumbling and bouncing down the mountain, and when they reached the bottom they were picked up by cranes with grab-buckets, and the cranes dumped the fudge into open waggons – into an endless moving line of waggons (rather like smallish railway waggons) which carried the stuff away to the far end of the room and then through a hole in the wall.

“Can we climb up to the top?” The children shouted, jumping up and down.

“Yes, if you are careful,” Mr Wonka said. “Go up on that side over there where the men aren’t working, then the big hunks won’t come tumbling down on top of you.”

So the children had a wonderful time scrambling up to the top of the mountain and scrambling down again, and all the way there and back they kept picking up lumps of fudge and guzzling them.

“Now I’m going to have ride on one of those waggons,” said a rather bumptious little boy called Wilbur Rice.

“So am I!” Shouted another boy called Tommy Troutbeck.

“No, please don’t do that.” Mr Wonka said. “Those things are dangerous. You might get run over.”

“Don’t you do it either, Tommy,” Mrs Troutbeck (Tommy’s mother) told him. “The man here says it’s dangerous.”

“Crazy old Wonka!” shouted Wilbur Rice, and the two boys ran forward and jumped on to one of the waggons as it went by. Then they climbed up and sat right on the top of its load of fudge.

“He’s wrong about that,” Mr Willy Wonka said quietly. “The first stop is most certainly not Chicago.”

“He’s quite a lad, our Wilbur”, Mr Rice (Wilbur’s father) said proudly. “He’s always up to his little tricks.”

“Wilbur!” shouted Mrs Rice, as the waggon went shooting across the room. “Come off there at once! Do you hear me!”

“You too Tommy!” shouted Mrs Troutbeck. “Come on, off you get! There’s no knowing where that thing’s headed for!”

“Wilbur!” Shouted Mrs Rice. “Will you get off that … that … my goodness! It’s gone through a hole in the wall!”

“Don’t say I didn’t warn them,” Mr Wonka declared. “Your children are not particularly obedient, are they?”

“But where has it gone?” Both mothers cried at the same time. “What’s through that hole?”

“That hole,” said Mr Wonka, “leads directly to what we call The Pounding And Cutting Room. In there, the rough fudge gets tipped out of the waggons into the mouth of a huge machine. The machine then pounds it against the floor until it is all nice and smooth and thin. After that, a whole lot of knives come down and go chop chop chop, cutting it up into neat little squares, ready for the shops.”

“How dare you!” screamed Mrs Rice. “I refuse to allow our Wilbur to be cut up into neat little squares.”

“That goes for Tommy, too!” cried Mrs Troutbeck. “No boy of mine is going to be put into a shop window as vanilla fudge! We’ve spent too much on his education already!”

“Quite right,” said Mr Troutbeck. “We didn’t bring Tommy in here just to feed your rotten fudge machine! We brought him here for your fudge machine to feed him! You’ve got it the wrong way round a bit, haven’t you, Mr Wonka?”

“Now, now,” murmured Mr Willy Wonka soothingly. “Now, now, now. Calm down, everybody, please. If the four parents concerned will kindly go along with this assistant of mine here, they will be taken directly to (the) room where their boys are waiting. You see, we have a large wire strainer in there which is used specially for catching children before they fall into the machine. It always catches them. At least it always has up to now.”

And high up on the mountainside, one of the workers lifted up his voice, and sang:

“Eight little children – such charming little chicks. But two of them said ‘Nuts to you,’ and then there were six.”

1 thought on “Lost chapter to Charlie and the Chocolate Factory”