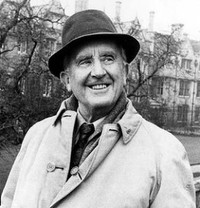 A century ago Russian forces were beginning the 133-day siege of Przemy?l and the German army took Péronne. Meanwhile, in a Nottinghamshire farmhouse, a young man wrote a poem about a mariner who sails off the earth into the sky. The Voyage of Éarendel the Evening Star deserves its day in the spotlight alongside war commemorations. It was the founding moment of Middle-earth.

Neither elves nor hobbits were yet in JRR Tolkien’s mind. But the star mariner is remembered in The Lord of the Rings, as Eärendil, forefather of kings, whose light in a phial wards off Mordor’s darkness. In the vast backstory of The Silmarillion, he carries the last Silmaril, a jewel preserving unsullied Edenic light, seeking aid against the primal Dark Lord.

None of this is in Tolkien’s poem from 24 September 1914. As an invented origin myth for the evening star, it is all energy and enigma:

Éarendel sprang up from the Ocean’s cup
In the gloom of the mid-world’s rim;
From the door of Night as a ray of light
Leapt over the twilight brim,
And launching his bark like a silver spark
From the golden-fading sand;
Down the sunlit breath of Day’s fiery Death
He sped from Westerland.

The poem hurtles on for a further five stanzas, but reveals nothing of background or motives. Yet Éarendel’s maverick course has much to do with Tolkien’s predicament as war broke out.

Read the entire entry here at The Guardian.

Read the entire poem below:

The Voyage Of Earendel The Evening Star
by J.R.R. Tolkien)

Earendel arose where the shadow flows
At Ocean’s silent birm;
Through the mouth of night as a ray of light
Where the shores are sheer and dim
He launched his bark like a silver spark
From the last and lonely sand;
Then on sunlit breath of day’s fiery death
He sailed from Westerland.

He threaded his path o’er the aftermath
Of the splendor of the Sun,
And wandered far past many a star
In his gleaming galleon.
On the gathering tide of darkness ride
The argosies of the sky,
And spangle the night eith their sails of light
As the streaming star goes by.

Unheeding he dips past these twinkling ships,
By his wayward spirit whirled
On an endless quest through the darkling West
O’er the margin of the world;
And he fares in haste o’er the jewelled waste
And the dusk from whence he came
With his heart afire with bright desire
And his face in silver flame.

The Ship of the Moon from the East comes soon
From the Haven of the Sun,
Whose white gates gleam in the coming beam
Of the mighty silver one.
Lo! With bellying clouds as his vessel’s shrouds
He weighs anchor down the dark,
And on shimmering oars leaves the blazing
shores
In his argent-timbered bark.

Then Earendel fled from from that Shipman dread
Beyond the dark earth’s pale,
Back under the rim of the Ocean dim ,
And behind the world set sail;
And he heard the mirth of the folk of earth
And the falling of their tears,
As the world dropped back in a cloudy warck
On its journey down the years.

Then he glimmering passed to the starless vast
As an isled lamp at sea,
And beyond the ken of mortal men
Set his lonely errantry,
Tracking the Sun in his galleon
Through the pathless firmament,
Till his light grew old in abysses cold
And his eager flame was spent.