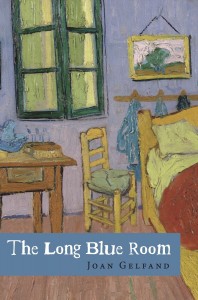 Ms. Gelfand searches her own motives with a touch of whimsey while probing for hard answers which makes her wide knowledge of humanity evident. She is a poet that has visited abroad and traveled her own country to give her a sense of contemporary life that is grounded in realism but also is presented with a delightful wit that’s penetrating and wise. She observes the rhythms, the good and bad of what is about her but maintains the appreciation of small things—takes time to thoroughly taste fruits like peaches and pears and wonder about them.

The Long Blue Room, the third poetry collection by Joan Gelfand, is divided into: Section 1. The Long Blue Room; Section 2, Ars Poetica; Section 3. Taste; Section 4. Sex, Death, and All That Jazz; Section 5. Scraping Dead Stars Off The Pavement; Section 6. The sections have poems well chosen for each equally divided. Practice. It has a Foreword, Introduction, and Epilogue. The two page foreword is by Renate Stendhal, the author of Gertrude Stein: In Words and Pictures. The title, The Long Blue Room, is from an oil painting by Vincent van Gogh which appears on the cover. In one of the poems bearing its name, the poet observes that the artist painted it three times until he got it right. The epigraph is a quote from “Ars Poetica” by Czselaw Milosz. Gelfand, an American writer, is the Past President of the Women’s National Book Association and a regular speaker at the San Francisco Writer’s Conference.

She has appeared in numerous national, international magazines such as The Griffin; Caveat Lector; The Toronto Quarterly and in anthologies such as Broken Circles: A Gathering of Poems for Hunger Anthology (Cave Moon Press, 2011). Also by Ms. Gelfand is: Seeking Center (Two Bridges Press, 2006); A Dreamer’s Guide to Cities and Streams (San Francisco Bay Press, 2009); Here & Abroad (Cervena Barva Press, 2010); Transported (Daveland Studios, 2011).

The first poem in the collection, “Good Morning, America, Where Are You?”
questions America’s position after the recent economic crisis: “The party’s over the game is played/The bad boys took off/With the cache.” p. 14  The questions are central to our contemporary life. Greed’s the topic of another poem, “The Money Shot” regarding plundered rainforests.

Another look at contemporary life is “Mother’s Day”: one appearing to have the good life in New York City ends her life in front of a train on 42nd Street. A poem about Sylvia Plath is also a woman who also ends it all.

“Bach Flower Remedies” using the narrative style is a humorous, 3 page look at 5 types of natural medicines bringing up questions one surely would have about small brown bottles of: Agrimony, Aspen, Impatiens, Elm, and Chestnut Bud coming to about $100. The reader is taken on a shopping trip having many aspects that will be familiar, one that they will laugh also.

“Cobra Sonnet” does not follow the traditional number of lines of sonnet or follow the rhyme scheme but does finish with a couplet providing a conclusion. It uses humor, knowledge of plants, irony, to craft a poem 26 lines well worth reading and rereading.

The tanka poems, traditionally using thirty-one syllables, are on such varied topics as: lime, maple leaves, and praise.

“Ode to Toast” is praise to roasting toast and the humor evident with:
“Raise a glass in honor of skinny wire coils/That heat out bread’s best.” and also “Let’s toast the aroma that rouses a dog/From its coma….”   p.42

“Paris Whistling” ends with the appealing lines:
“When did it become passé
To share a tiny slice of happiness,
Wear your heart on your sleeve?” p.40

Her poems have aspects of a cosmopolitan and a naturalist, a combination that makes her poetry so grounded. The Long Blue Room is a collection to go back to again and again as it is a conversation with a friend with wit and understanding: one who writes not to confound or puzzle but to share the extraordinary lurking just beneath what is all around us. Ms. Gelfand finds inspiration in Monet’s paintings, William Carlos Williams poems, letters in the Hebrew alphabet , movies—but mostly from what she has experienced, what is within her as a contemporary American woman worthy that is of being shared.