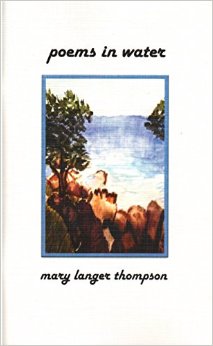 Every poetry collection creates its own sense of space: geographic, cultural, and personal: word selection and use are fingerprints of each writer. The reader tastes a new world and if the poet is good, the world is savored, revisited again and again as in the case of Poems in Water. Some of the poems first appeared in: Earth’s Daughters, Journal of Modern Poetry, Quill and Parchment, as well as various anthologies.

The forty poems by the past Senior Poet Laureate of California, Mary Langer Thompson, are direct and use ordinary events which readers can easily relate and appreciate. Rhyme, when it is used, is well crafted in the 14 line sonnets. Her poems are one or two pages and some have dedications; one is in the form of a letter, one plays with the word “addresslessness” relating to the depth of the Mariana Trench in the Pacific Ocean.

The individual poem, “Poem in Water” beautifully presents the ability of poetry being capable of “washing the dust from my heart” even if not being able to “decipher the message” that appear written in “retextured liquid”

“Butterflies Alive!” describes entering a screened garden with various kinds of butterflies, some living very short lives but showing no fear and closes with: “We watch a mourning cloak briefly/close its wings.”

The poet’s net is wide: One poem uses the children’s classic bedtime story, “The Gingerbread Man” ; while another uses 9/11; John Glenn, the astronaut; chewing gum found on cement; the city of L.A.. “Beautiful Screamer” includes Van Gogh, Bruegel, Picasso, about the iconic 1895 painting, The Scream, by Edvard Munch; it suggests he be put in a place he doesn’t upset others. Her playfulness, often lurks in “Driving Miss Joanne,” and “Sonnet for a Sour Grape.”

Emily Dickinson, Allen Ginsberg, T.S. Eliot, William Shakespeare are poets mentioned. In one poem, “Because I could not stop/for a broken foot” echoes Dickinson’s: “Because I could not stop for Death/He kindly stopped for me”. The poet’s mother refers to cultural icons such as Gracie and Ethel. June Langer, Mary’s mother, painted the landscape for the cover. Dr. Spock for mothers “in the 50’s” also joins the topics.

But everyone will relate to “Dialogue with Signs of the Times” with eye catching messages that boggles the mind one reads while commuting to work on: car plate frames, church marquees, store banners, and bumper stickers. The commuter’s responses fit the messages well and it reminds me of Garrison Keillor’s observation: “Nothing bad ever happens to a writer. Everything is material.”

One of my favorites, “Search for a Grandfather” is the common need of connecting with ancestors. In the poem, Joseph Langer isn’t found in census and death records after coming to America:

Now, somehow,
I need to know
where you went,
where you died.
Because too often
in this rock-strewn California desert,
I, too, am lost.

Humor is never far removed from many of the poems. There are no extra words or esoteric phrases cluttering the accessible, highly readable work and I’m looking forward to her next collection.

1 thought on “Book Review of Poems in Water”