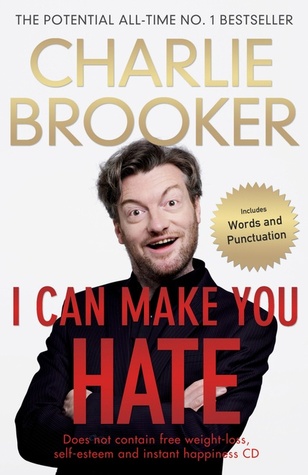 Review of I can make you hate by Charlie Brooker

‘I can make you hate’ is a collection of television presenter and journalist Charlie Brooker’s columns from the Guardian written between August 2009 and July 2012, where he pokes splenetic fun at all manner of targets, from politicians, other newspapers like the Daily Mail, and the stars of reality television.

Most people, who are already familiar with Brooker’s work know what they will be getting from him, so the angry, well written rants are not surprising, but what is is that half way through the book, he announces that he will stop writing his column, to concentrate on his television shows, and it is here there is a definite change in tone.

Maybe the TV shows would be reaching a wider audience than his columns, so maybe being less biting was seen as wise choice, but it means that in comparison, the second half of the book, which also includes scripts and monologues from the 10 o’clock show and his screen wipe programmes are also included, seemingly as filler, rather than for their intrinsic value. Some things working better on screen than they do on the page, and it is for this reason that the second half of the book seems to fall flat.

However, between his previous working such books as Screen Burn, Dawn of the Dumb, and The Hell of it All, Brooker’s live has changed, from being single, to marriage and the birth of his son (which is described, touchingly in the book) and has taken up running, so he has become the type of person that he used to despise.

Brooker is at his best when he is being satirically curmudgeonly. The intelligence, wit and bite of his earlier work may be missing, to a certain extent, but that doesn’t mean that this collection is not worth reading. For those of us that are nearly Brooker’s contemporaries, there is a lot to like, and sympathise with, such as the passage of time, how Television needs to be better to have the same impact on us now then it used to, and how it always seems to the tories and reality TV stars having a better time of it than you.