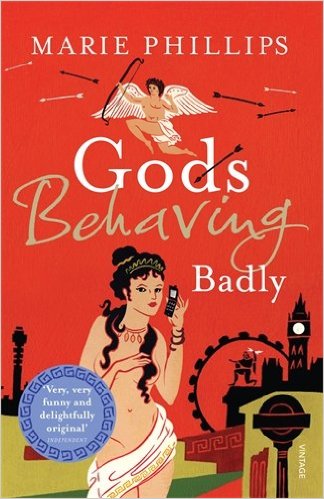 Marie Philip’s book, Gods Behaving Badly looks at how immortal Gods would live and behave if they lived in a modern, run down home in North London, with too much time, and not enough distractions.

Artemis, the Goddess of Hunting, is now a Professional dog walker, and her brother Apollo, the Sun God is a TV Clairvoyant on a minor television channel. They live with their many siblings, and Aunt Aphroditie, the Goddess of Love, who scandalises the family with her sex life, her ease with her own body, and her work on a Telephone sex line. They live an uneventful life, not leavened by sex, strong wine, bacchanalia, or the ability to turn people into trees, where they no longer respect each other or their powers, and where the world no longer believes in Gods, because Science has pushed faith out.

The story focuses on Alice, the family’s cleaner, and her would be boyfriend Neil, and Apollo’s infatuation with Alice, caused by a trick that Aphroditie played on her Nephew.

Alice used to work at the Television Station where Apollo’s low-cost, easy exploitation show was made, and fell in love with Alice when Aphroditie cast a spell on him, to make him fall hopelessly in love with the first person he sees. He does not understand why Alice does not feel the same about him, but she and Neil each feel more than friendship for each other, but don’t tell each other, due to their somewhat reserved natures.

Alice is clearly a fish out of water in the house, and even though they all have powers and abilities beyond the knowledge of mortals, cannot seem to be able to use a Hoover, or a duster.

However, the interaction of Alice with the Gods changes all of their lives. When Apollo tells Alice who they really are (although the names could have been a give-away) Zeus, the family’s confused and aging Patriarch has her killed by a bolt of lighting.

The last third of the book has Neil and Artemis going into the underworld, to save both Alice, and the whole world. Apollo shows Neil his powers, by turning out the Sun, but the rest of the family do not have another power to bring him round, and the Earth is plunged into 24 hour darkness.

The after-life is shown to be big world, filled with seemingly identical buildings, where the dead of all ages and religions gather to wait for the jobs and living quarters they will be assigned. Alice is employed as a Scrabble player, teaching those who died before it was even invented how to play.

Marie Philip’s story has strong characterisations, and an interesting premise. The conceit and arrogance of the Gods (particularly Aphroditie and Appollo) is very well drawn, and shows the family in the main to be particularly unpleasant and uncaring, like many families that were at one time all powerful, but have since fallen onto harder times.

They denouement of the book, with Alice saved from death, and Neil and her inviting the family to their wedding is only wish fulfilment, but is a suitable ending for a novel that is so vivid and full of life and character.
Book Review