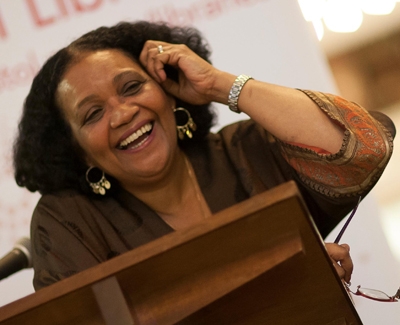 Poet Lorna Goodison will step into the role of Jamaica’s second official Poet Laureate becoming the first Jamaican woman appointed to the post. Goodison picks up the mantle from Professor Mervyn Morris, who was the first Poet Laureate of Jamaica appointed by the government. Goodison, who has authored 12 books of poetry as well as short story collections and a memoire will be invested as Poet Laureate of Jamaica on May 17, 2017, at a ceremony held at King’s House in Kingston. She will serve in the post from May 2017 through to May 2020.

Currently one of Jamaica’s most celebrated writers, Goodison has received a Gold Musgrave Medal from the Institute of Jamaica, and a Jamaica National Order of Distinction (Commander Rank). Her collection I Am Becoming My Mother won the Commonwealth Writers Prize for the Americas region (1986) while Oracabessa earned the OCM Bocas Prize for poetry in 2014.

Goodison’s other poetry collections include Turn Thanks, Travelling Mercies and Controlling the Silver. She has penned three short story collections, Baby Mother and the King of Swords, Fool-Fool Rose is Leaving Labour-in-Vain Savannah, and By Love Possessed. Her memoir, From Harvey River: A Memoir of My Mother and Her Island, described as “a masterpiece of timing and texture”, received much critical praise and was awarded British Columbia’s National Award for Canadian Non-fiction in 2008. Goodison’s work has also been widely anthologized.

Here is one of her poems:

I Am Becoming My Mother

My mother had a linen dress
the colour of the sky
and stored lace and damask
tablecloths
to pull shame out of her eye.

I am becoming my mother
brown/yellow woman
fingers smelling always of onions.